Share a memory
Obituary & Services
Tribute Wall
Read more about the life story of Lois and share your memory.

Lois Irene (Tinsley) Malone, 98, passed away Monday September 12, 2022 in Augusta, KS.  Visitation 5:00 - 7:00 p.m. Thursday, September 15, 2022 and service 2:00 p.m. Friday, September 16, 2022, both at Augusta United Methodist Church, Augusta, KS. Burial will follow at Elmwood Cemetery Augusta, KS.
Lois was born November 8, 1923 to Earl and Irene Tinsley in El Dorado, KS.  Lois was united in marriage to Loren Malone on October 18, 1945.  They were married for 67 years until Loren's passing in 2013. They had two sons who survived her, Michael Brent Malone (Diane) of Sheridan, WY and David Kent Malone (his late wife, Cyndy) of Augusta, KS. She is also survived by: her grandchildren, Matthew Malone and Meaghan McClure (Ben) of Augusta, and John Ayres (Lindsay) of Windsor, CO; great grandchildren, Elynn and Zain McClure, Kinsley Malone, and Alyssa and Avery Ayres.  Lois was preceded in death by her parents, a brother, and a sister.
Lois was a Brownie and Girl Scout as well as participated in Harvey County Fair 4-H (where she won 2 blue and 1 red ribbon) Girl Reserves. She graduated from Sedgwick High School in 1941. She later attended Wichita University for two years and taught 1 year at Maize (1st and 2nd grade).  During WWII, she went to Kirtland Air Force Base in Albuquerque, NM where she was a Link Trainer. Lois was the first school secretary at Lincoln Elementary in Augusta, KS for 12 years.  Her love for children didn't stop there as she was a cub scout mother and taught D.D.  Lois served on several committees at the United Methodist Church in Augusta, KS where she was a member as well as served as president of UMW two terms.  She was a great mother, grandmother, great grandmother and friend to many and will be greatly missed.
Memorial donations may be made to Augusta United Methodist Church 2420 N. Ohio Augusta, KS 67010.

To send flowers to the family or plant a tree in memory of Lois Irene (Tinsley) Malone, please visit our floral store. 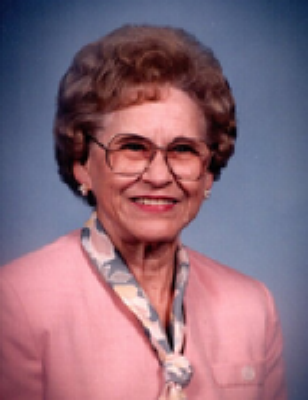